A pascifist hugs the axel under  a bus of workers headed into the nuclear test site
Wakenhuts use pepper spray and pain holds
Photos of the Mother's Day protest at the Newe Sogobia, the Shoshone Tribal lands, the site of the Nuclear Test site, 2001. This was a non-violent protest.
photos  © Kathryn Barnes, photojournalist
THE ISSUES
1 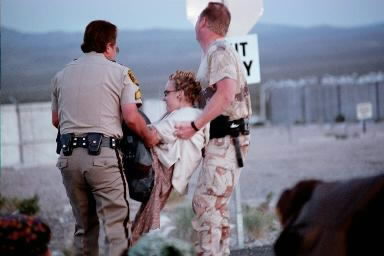 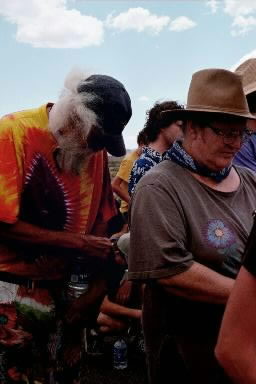 Photos (left to right)
During a prayer by a Shoshone leader, people bow their heads and pray
Wakenhuts go under a bus that has stopped when a young man rushes underneath it and wraps himself around the axel to protest the work being done at the NTS...nuclear waste dumping, weapons testing, etc. The Wakenhuts sprayed the man's eyes with pepper spray and pulled him out from under the bus. Other people laid down in front of the bus to stop it from moving which may have killed the young protestor.
The young woman at the right was forced away from the soft blockade and carried into the Nuclear Test Site and arrested.  Although she was laughing when this photo was taken, the treatment later in jail was no laughing matter.
All the protestors were eventually freed.