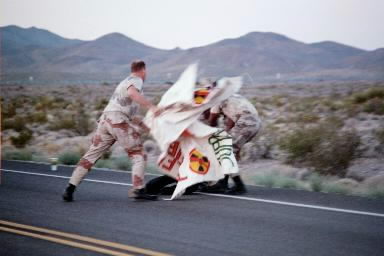 Most of the violence against the peaceful protestors happened on Monday, the fourth day of the non-violent action at the NTS.
The photo at the right shows the Wakenhuts forcing a young man to the ground who was carrying a banner. They did this outside the NTS, then they dragged him into the NTS and arrested him.
Wakenhuts used "pain holds" on protestors who formed a "soft blockade" (sitting beside each other and linking arms together) across the road into the NTS. Wakenhuts dragged the line of sitting pacifists into the NTS. In one photo excruciating pain is on the face of a young man as Wakenhuts squeeze his private parts.
Photos of the Mother's Day protest at the Newe Sogobia, the Shoshone Tribal lands, the site of the Nuclear Test site, 2001. This was a non-violent protest.
photos  © Kathryn Barnes, photojournalist
THE ISSUES
1